How to use the Quarterly Productivity Planner to achieve your goals 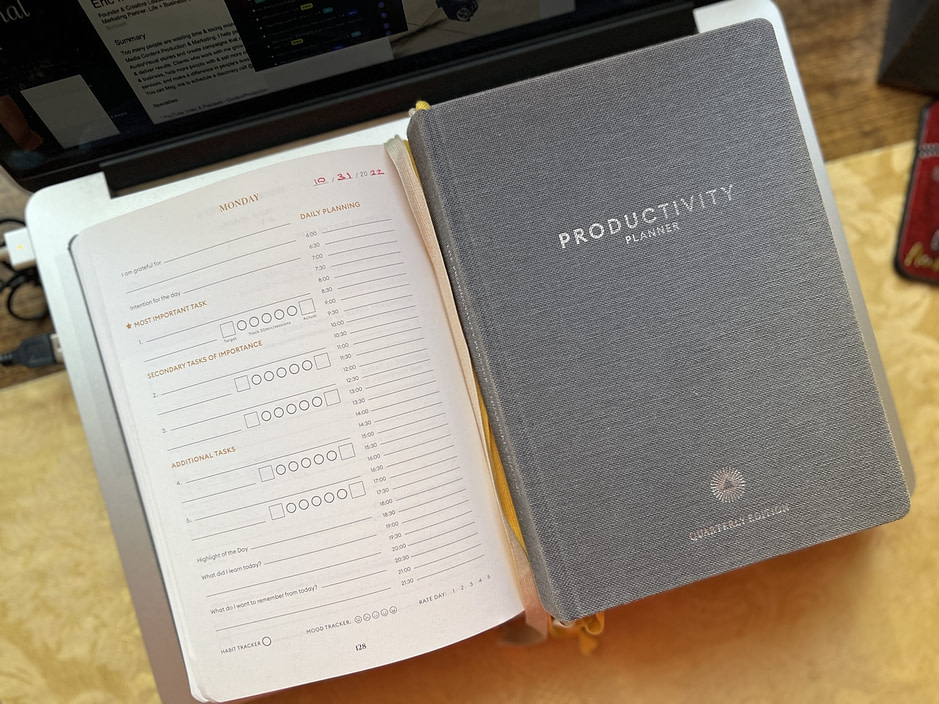 Hi. I'm Catherine and I'm the Marketing Assistant at Gold Street / Eric Michael Cap’s co-guinea pig when it comes to testing on the latest and greatest productivity tools and techniques.

So today I'm going to be reviewing the Quarterly Edition of the Productivity Planner by Intelligent Change.

I used this planner in the second quarter of 2022, and I was switching away temporarily from the Productivity Planner, which is much smaller.

So this is actually six months of planner, whereas this is only three months, and you can see that it's actually a bit thicker.

And I was also using it in conjunction with the Best Year Journal, which is something that I did at the beginning of the year to map out my year and reflect upon 2021, and decide what I wanted to accomplish in 2022.

I really enjoyed this planner. I found it a little bit repetitive at times, but overall I think it did a really good job of combining a lot of their other planners.

The drawback, of course, is that this is only for one quarter, so you have to buy four for the year instead of two, which would be the case with the Productivity Planner, but it's not bad.

So this planner starts off with themes, kind of like a high-level overview of what you want your quarter to look like. And it breaks it up into a bunch of different categories that create a full life. So relationships, fun, celebrate, and then of course work.

It also has a quarterly preview with your top seven most important “rocks”. So those are the things that are going to anchor you throughout the quarter.

And as you work through the planner, it has check-in points to make sure that you're actually laddering up to those seven goals that you set out in the beginning.

After you map out your (big) rocks, it has supporting actions and resources as well as timeline, so that you can really set those “S.M.A.R.T. Goals”.

Something that's interesting about this planner is that it has a habit tracker. Both Eric and I were talking about how we ended up not really using the habit tracker, mostly because the habit tracker is placed at the beginning of the planner rather than throughout.

There's no way to track your habits at the bottom of the page after you're done with your day, you have to flip all the way back to the beginning to fill in like a little dot or like a checkmark for every single day. So while having the habit tracker is nice, both of us found that we weren't really using it.

So it has the number one most important task of the week, which is highlighted, and then it has two secondary tasks of importance, and then seven additional tasks, a self-care commitment, and a weekly overview.

Another difference between this one and the Productivity Planner is that it has a column for daily planning with a timeline.

And so doing that and putting it all down on paper just was a few too many steps for me, so I didn't really use that part.

As I mentioned previously, the quarterly planner combines some aspects of The Five Minute Journal into the planner.

So one thing that it does is it has a space for your gratitude for the day (but) rather than listing three things you're grateful for, it's just one, and then you list your intention (for the day)

And then at the end, it's a shorter version of the closing prompt with highlights, something that you learned, and what you want to remember for the day.

And then again, similar to the Productivity Planner it has a weekly review section. So in it you can list your wins, your favorite moment of the week, some gratitude, and some tasks that weren't completed from last week.

There's also a space for your quarterly rocks check-in to keep you accountable to the goals. And I found that really helpful because that meant that every single week I was flipping all the way to the beginning of my planner and checking in on my quarterly goals. So it really just helped me keep them top of mind.

There's also a section for you to talk about what you learned and people that you should follow up with and connect with for the next week.

Overall, this is a really helpful check-in section. In some ways, it did feel a little repetitive, and both Eric and I were talking about how sometimes we found ourselves skipping the (full) weekly review every now and then, because sometimes what happened in a week is just not enough to review.

But overall, I really do like the quarterly version. I think that it keeps you a little more accountable to your Big-Picture Goals than the (reg.) Productivity Planner does.

It just feels a little more efficient. It feels like I can use this one instead of having three different planners in the form of a Five Minute Journal, the Best Year Journal, and the Productivity Planner.

I also really like that it has notes. I'm definitely a note-taker. Currently, I have like a giant notebook that I'm taking notes on, and so I have to carry around two books every time I'm going to move my workstation.

There's definitely some aspects of it that could be improved, but there is no perfect planner, and given that this is a new product, I can imagine that they're going to make a lot of changes. So I'm looking forward to those.

Eric Michael Cap is the Creative Leader & founder of Gold Street - a Media Content + Marketing Agency based in Burbank, (Los Angeles County),, CA. He's run a successful purpose-driven business for over 2 decades, has been married for 22 years, and a committed Jesus-follower for 3 decades. He attends Mariners Church in Irvine (Orange County) where he leads a Men's Life Group, and is a Faith Driven Entrepreneur facilitator. His daughter is a Biology major @ UCLA. Eric enjoys the beach, hiking, music, photography & people. #EricMichaelCap #GoldStreet #entrepreneur

Please log in again. The login page will open in a new tab. After logging in you can close it and return to this page.